Why you need to humidify!
This is happens to guitars that are left in dry, arid or cold environments without humidity supplementation. 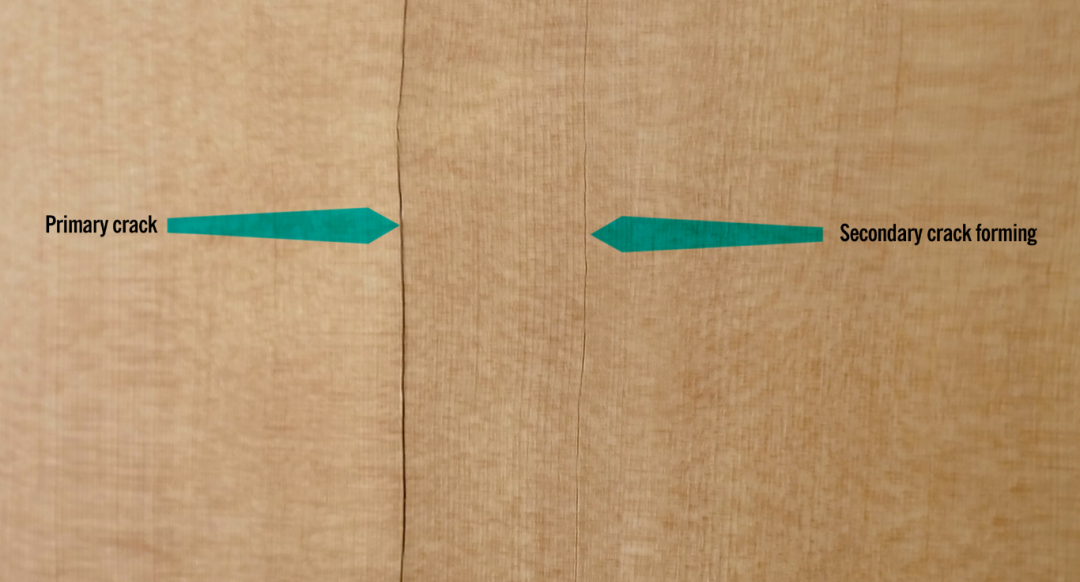 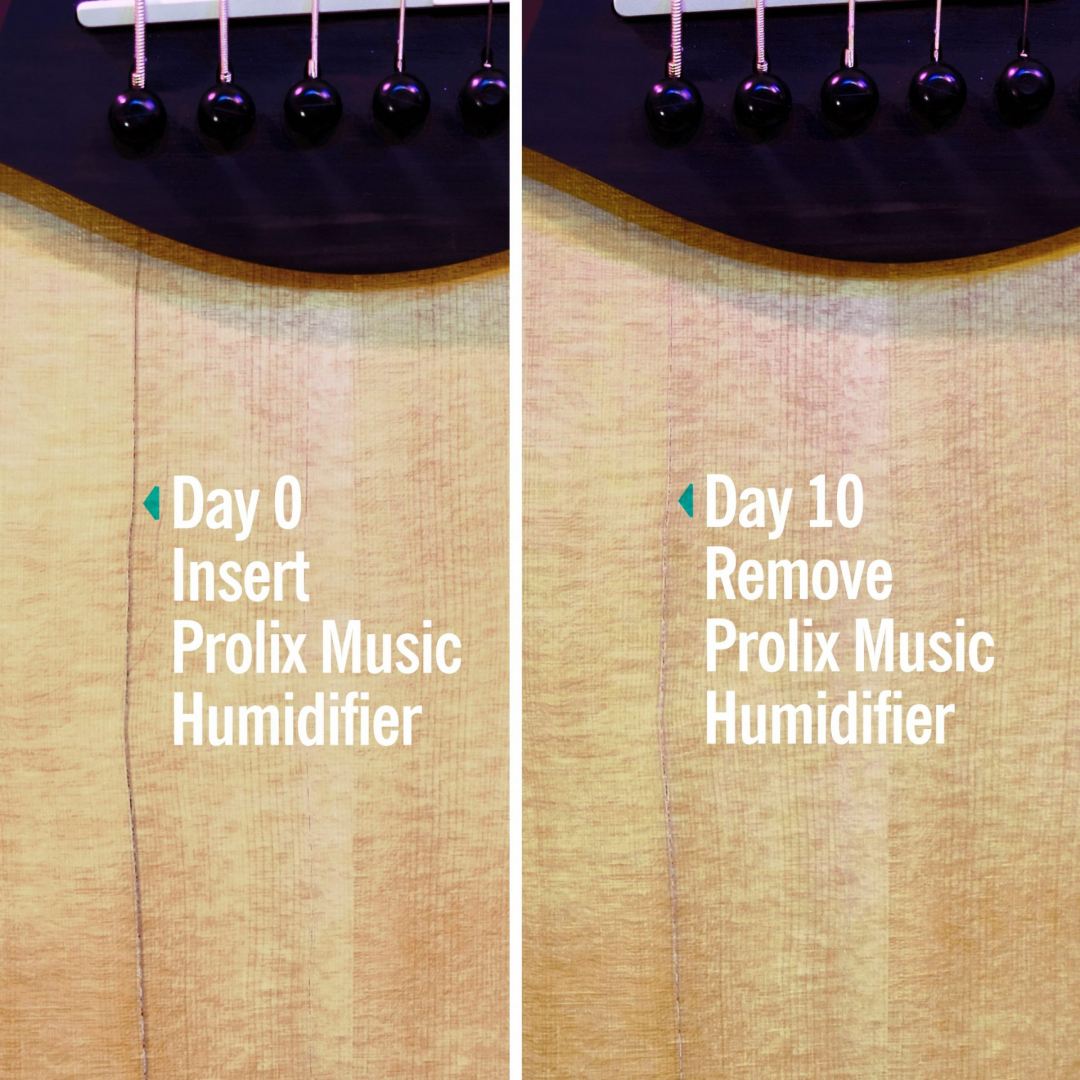 If you’re in doubt about the power of our Guitar Humidifiers, here’s the evidence.

After 10 days the crack had healed together well enough to take it to a professional for repair with glue and cleats.

Not only that – but all the Fret Buzz was gone, before we took it to the luthier.

The good news is… you can get back from the crack, but why let your pride and joy get this dry in the first place?

This is why you need to humidify!

We know there are products that you use to stick inside your guitar case that release small and slow changes to RH, but we love looking and playing with our guitars.

That’s why we invented the Prolix Music way to humidify.

You charge it up with water, slip it in the sound hole if the humidity is low, and keep your guitar out, ready to play when the moment takes you. Instant pleasure within arms reach.

And when the RH drops below 45%, add our guitar humidifier, and when it goes above 55% remove it.

It’s that easy. And why shouldn’t be?

Prolix Music Guitar humidifiers – Fast, effective relief from Fret Buzz! No more frustration with slow in case humidifiers, poor tone sound and all the other hassles of just keeping you happy and your guitar healthy and awesome sounding.

Back in the day we didn’t really believe in humidifying. To be honest, we thought it was complete BS.

But one day we came across a guitar manufacturer who advertised their guitars as coming complete with 2 saddles. Say what?… 2 saddles, why?…

They had a taller one for the winter and shorter one for the summer… Hold on! What were they saying? The string height changes seasonally? Why? There had to be reason surely – or was it some marketing scam?

What could it be? What changes happen? After spending a lot of money, and hours working out how to set up our guitar – we went all-in and bored ourselves with wood.

This was the moment of “WOW! I did not know that man.”

It turns out that wood is hygroscopic, which means it can absorb moisture from the air. When it absorbs it swells, and when it dries it shrinks. But there’s more to it than that. Wood is anisotropic, which means the amount of change is direction dependent. Changes across the grain (i.e. across the width of the guitar) are significant, whereas changes along the grain are negligible.

Still awake? Well we also learned that the neck changes too! But it’s only the width that changes with humidity, which is why we feel sharp fret ends in the winter.

But we still didn’t know why the height of the saddle changes?

One last deep breath, we’re nearly there. You will be rewarded…

It turns out that this has to do with the construction of the top. Braces glued to the underside of the soundboard, oppose the grain of the top.

The braces and the top are affected by humidity! The width of the top changes significantly, while the length of braces remains relatively constant. This creates opposing forces that cause a bending moment in the top of the guitar. Either out (too much humidity) or in (too little humidity).

In the winter the top sinks as the air dries, and in the summer the top lifts as the humidity increases.

After all, it turns out that humidity is the key to a happy healthy guitar and no saddles to change!

Eureka, now we know why we get 2 saddles!!! And how much pain is that to change twice a year?

For you geeks out there…

Humidity is water in the air, held in a gaseous state. Humidity is typically specified as Relative Humidity (RH). It is a percentage, and is temperature dependent, ranging from 0%, meaning that it has no moisture content, to 100% meaning that it is completely saturated with water vapor at the current temperature.

Before use, wood is typically air or kiln dried until only Bound Moisture remains. Bound moisture is water that has been absorbed by the cell walls. Moisture that has been absorbed by the cell walls then equilibrates slowly to the relative humidity of the surroundings. Changes in Bound Moisture Content result in dimensional changes in the wood. Wood swells and shrinks across and through the grain but is stable with the grain. For quarter sawn lumber (the best cut that is made specifically for high quality guitars and other instruments) expansion is linear.

However, when two pieces are glued together with opposing grain directions (as in the ribs on the underside of the sound board of a guitar), opposing forces cause bowing or cupping with changes in Moisture Content.

#3 – How does relative humidity affect the moisture content of wood?

MC and RH are related. The relationship, however, is complicated. It has to do with vapor pressures and equilibration.

This means that a change in RH will drive a change in the moisture content of the wood. That said, RH can change rapidly whereas wood is very slow.

This is why we humidify, but also why measuring humidity can be a little misleading.

#4 – What does this mean for you and your guitar?

Changes in MC affect the shape of the sound board, which in turn affects the action. In severe cases you can see it just by looking at the top, but long before you see it, you will feel it when you play. Adding moisture will cause the top to bow, raising the action –  too much and you will find those barre chords harder to play. Whereas losing moisture will cause the top to sag, lowering the action – too much and you will start to get that dreaded fret buzz. The sound of the guitar is also another little tell-tale sign, albeit less obvious. A guitar with the right moisture content will have a fuller sound than one that is overly dry.

What about the neck of the guitar?
Both the neck and the fret board have the same grain direction. They will not change length with changes in moisture but may change subtly in width. The good news is that intonation is not affected. However, as the neck dries out use of a fret board conditioner is recommended. And, if you’ve left it a little late you may begin to feel sharp fret ends. Fortunately, this can be simply fixed by filing them smooth. File them once in the dead of winter and chances are, you’ll never have to file them again!

How do you know your moisture content is right?
Feel it in your fingers, hear it in the sound, and stop worrying about the perfect RH – You don’t actually need to know that, a hygrometer is just a guide, your feel is the truth – it’s that simple! 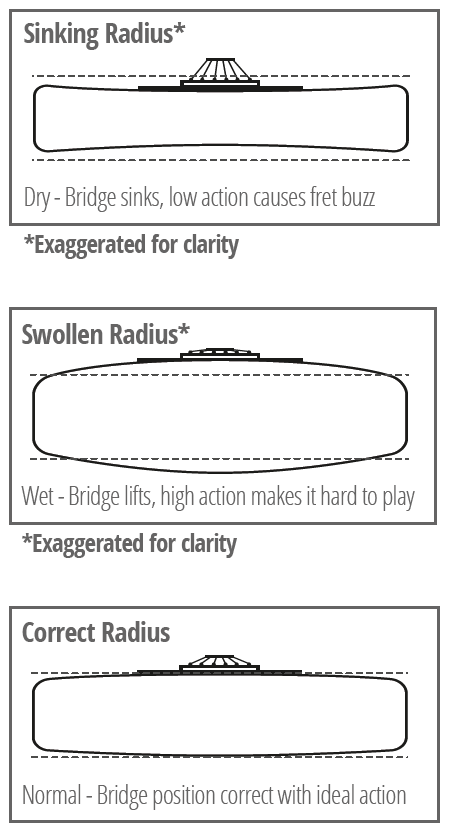 Combine with humidifier packs for easy maintenance.

Paul D.
Read More
Reviewed in the United States on July 11, 2021 Size: 3 Pack Verified Purchase
Vertigo
Perfect to combine with the Diodarrio humidifier packs. Those packs maintain the right humidity and these will actually rehumidify those packets. I live in Denver which is a high desert, so it gets really dry here. Combining those two has allowed me to easily maintain my acoustic guitar.

Works great. 💯

Ripley
Read More
Reviewed in the United States on April 13, 2021 Size: 1 Pack Verified Purchase
Vertigo
Have a backup, all wood guitar. I had put in case, and had not touched in months. Pulled it out, and 1st and 2nd sting were fretting out at 11th fret on up. Filled up product, and put in guitar, and guitar back in case. After 4 days, no more fretting out. Plays like the when I bought it. 😁

It really works and so simple

Michael Teach
Read More
Reviewed in the United States on July 5, 2021 Color: Black/Blue Verified Purchase
PET-1
It was exactly as advertised. It was flawless. To this day, I haven't the faintest idea how is works, but I do know that it definitely Works.

As advertised

Rhodey Mark
Read More
Reviewed in the United States on December 24, 2020 Color: Red/Black Verified Purchase
PET-1
Just refilled it after three weeks, and it appears to be exactly as claimed. Left in the soundhole of a guitar that stays out in the heated air, and the guitar seems happy with the process. I was concerned about the Fishman wiring and it sitting near the output jack but it looks like it coexists peacefully with the electronics. I would put this in the case vs soundhole for an enclosed instrument, but if it is a daily player drop it in and forget it for a couple weeks.
Previous
Next
Zen & the Art of Humidity
Discover More
Moisture Content. Using your guitar as a hygrometer
Educational

Anyway, if you allow your guitar to “equilibrate” to a DRY environment, you really won’t be doing it any favors at all. You will distort the shape of the body.

You will start to lose the arch in the top of the guitar, which will affect the action. As the body shrinks the location of the saddle will move relative to the neck which will affect the intonation. And finally, the density of the wood will change which effects its resonance and hence affecting fullness of the sound.

That said, be warned against over humidification. Always avoid over humidifying, all we ask is you just maintain the guitar at a reasonable humidity. And if you do have a cracked or overly dry guitar, use a humidifier. Ideally you want your guitar to live in a 50% RH environment. You want the wood to maintain the moisture content that it was built with, which it will do if you keep it at 50%.

If you live in a region where humidity is consistently 50% all year round… then you have no worries, but for those of us that live in areas with extreme dryness, or in areas with seasonal changes, we really need to be aware of the affects of humidity on our instruments.

Wood and humidity are important

The moisture equilibration process for wood is slow, taking days to weeks, hence short-term changes in humidity have little effect. However, the effect of long-term, seasonal changes can be profound. For guitars, the moisture content of the wood should be maintained at around 8%, equating to a humidity of around 50%. So, when the ambient humidity drops below 45% for an extended period, humidity in proximity to the instrument should be supplemented.

This is achieved using a humidifier with the following features:

Passive – meaning that there are no batteries, fans, heaters, etc.

Refillable – it absorbs water as a solid, only releasing it through evaporation

Simple to use – unmistakable indication of its state of hydration.